Eight hours with lunch and a few breaks to sit and plan the next move resulted in a generator box at days end. The box turned out quite well. It is completely lined with cement board and has two muffin fans pushing between 100-120 cubic feet of air per minute each – mounted simply on a piece of cement board via two screws each to a vertical board, itself attached to the cement board via one long screw through the bottom. The fans are not attached to the wall and can be easily removed. The passage through the wall is also lined with cement board. After a long day’s work we tested it out and were able to successfully run the generator within the box. The fans pull so much air that a negative pressure is created, sucking air under the door and venting 100% of the exhaust. Building the box saw the use of a circular saw for cutting the cement board first, but we quickly burned up the blade. After switching to a saber saw we were able to cut the remainder of the cement board with one blade, much quicker, and much easier.

When the generator is turned on with the remote starter the fans, plugged directly into the generator, will turn on as well. A spare fan is stored in the workbench. The simple design of the fan mount means that if a fan burns up it can be replaced quickly by removing just two screws. In addition to that, each fan has a two prong plug, which means that when a fan is switched no new wiring has to be done either. Using two fans also adds a layer of redundancy to the ventilation system. 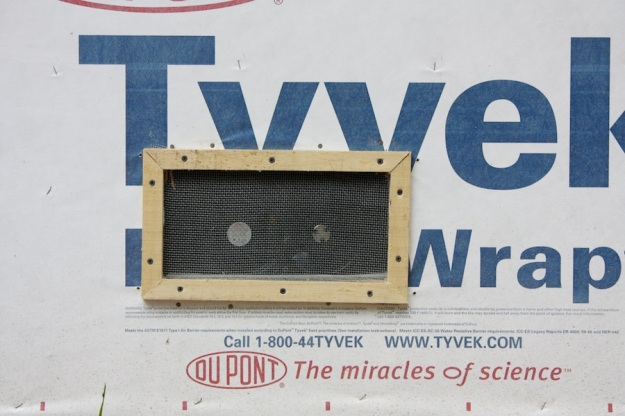 Originally we used an aluminum vent, which had slots angled at a 45 degree angle to prevent rain from passing from the outside to the inside. This had two main problems. First, the aluminum slots blocked a large amount of airflow. This increased resistance to airflow meant that hot air lingered longer in the opening, which in turn greatly increased the heat and stress put on the fans. By replacing the vent with a wire screen (above) we were able to greatly improve the efficiency of the powered vent. Also, the two foot overhang on from the roof provided adequate rain protection.

2 thoughts on “early days :: generator only”