Since the very beginning the Ol’ man and I have dreamed of ways to add surveillance to the offgridcabin. The easiest, and first method we utilized, was to use trail cameras. Initially this system relied on cameras with a visible flash. This provided a clear photo night or day but wasn’t very covert in the low-light hours. Then invisible flash cameras hit the market and could take photos undetected. Too bad most of the black-flash cameras yielded photos that were grainy, over/under-exposed, and low resolution. The first camera to produce useful black-flash photos (with a fast trigger speed) was the Reconyx Hyperfine HC600 and we started using it shortly after its introduction in 2011. Look it up; it was at least 5 years ahead of the competition and is highly regarded for night-time image quality. Initially, the HC600 retailed around $550 for a single camera. Today I added 5 Blink XT cameras to the cabin for a total cost of $299. These cameras rely on a WiFi connection to function – that was also added today. Poor reception at the offgridcabin meant a cellular booster was also needed.

Here follows the cellular booster / wifi hotspot / wireless surveillance installation. The total project cost just under $1000 and the only recurring fee is for the Verizon Jetpack® MiFi® 8800L, which costs less than $15/month for 1GB of data.

I have used Blink cameras at my house for nearly 2 years and was an early adopter. The hardware is well designed and only recently has the software caught up with what the hardware is capable of. I’ve enjoyed the product and have eight cameras at my house and use Life360 and IFTTT on my iPhone 8 to automatically arm and disarm the cameras. First person home disarms the system, last one to leave arms it. It works really well. For now, the cabin cameras will be manually armed and disarmed. The one weakness of Blink is that the cameras require a reliable internet connection at all times in order to function properly. Solving that problem is where most of the budget was spent on this project.

The first step was to find a cellular booster that would function off of 12VDC. The Surecall Fusion4Home 3.0 met my specifications. Their customer support was responsive to my questions about power-supply requirements, and detailed specifications were listed for each booster model online. After that, the next step was to find a cellular hotspot. I have AT&T for my phones and share an unlimited plan with my parents. Unfortunately AT&T was a dead end on two fronts. Their best hotspot has a tendency to overheat and the workaround for continuous use is to plug it in to USB power and remove the battery – not good signs when I need reliability. I can’t walk over and simply restart the hotspot when it goes funny. The second shortfall was the requirement for a separate data plan in addition to a monthly line charge… $50/month total for the smallest data plan of 3GB. The only other option was Verizon. Feeling defeated I investigated and was beyond surprised that I could get 1GB data for less than $15/month after all fees and taxes. Holy wah! With all the pieces on the board I poured over fine print for a few days and then placed some orders.

As the kit began to arrive my thoughts moved on to how the installation would look. In the shop I was wrapping up the Sobotta River Table and had some free space on the workbench. A wide hickory board and two ash batons made the perfect mounting panel. Cords were securely mounted onto reverse of the board, and keyholes routed into the batons, which made for a fast and efficient mounting solution. On the front of the board I used Festool 5mm dominos painted black to cradle the Blink camera hub and Verizon MiFi hotspot. An 12V accessory/USB outlet was mounted to provide power to the three units. I’ve noticed that some of the older USB 12V chargers, when in use, cause violent fluctuations in the 12V power supply of the cabin and cause lights to flicker and pulsate. Newer chargers labeled as fast chargers do not cause this. In order for any device in the cabin to be in continuous operation (including this accessory/USB outlet) is has to have some sort of overload protection built in. 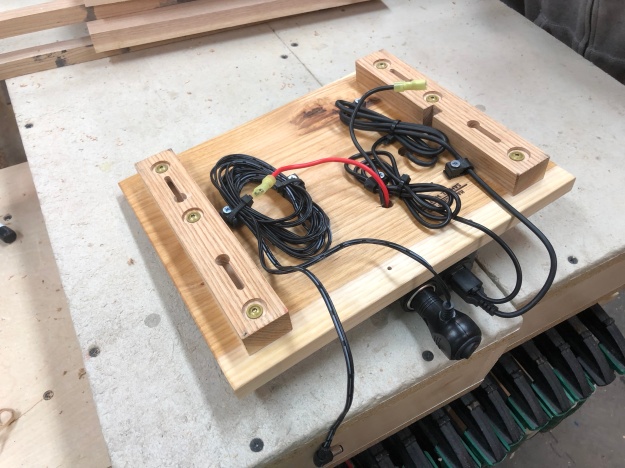 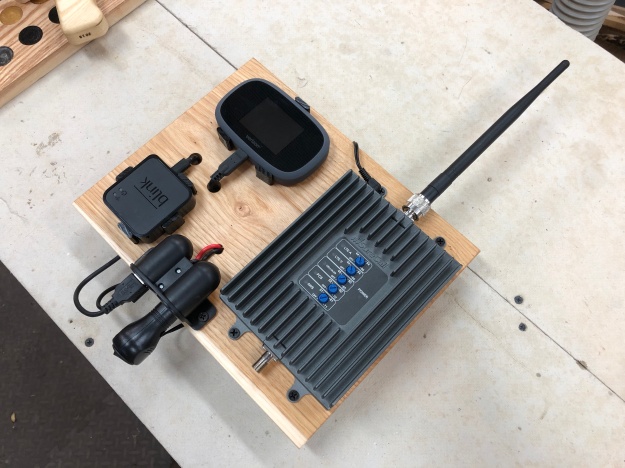 Once the mounting board was built and all the components were tested it was time to head to the cabin for the installation. The mounting board was hung on the wall with two screws and then power was supplied from the 12VDC fuse block left of the breaker panel. That was the easy part. The hard part was running the coaxial cable across the basement and out the far wall to the TV antenna pole. An 18″ drill bit was needed and even then it was barely long enough to span the thickness of the sill. 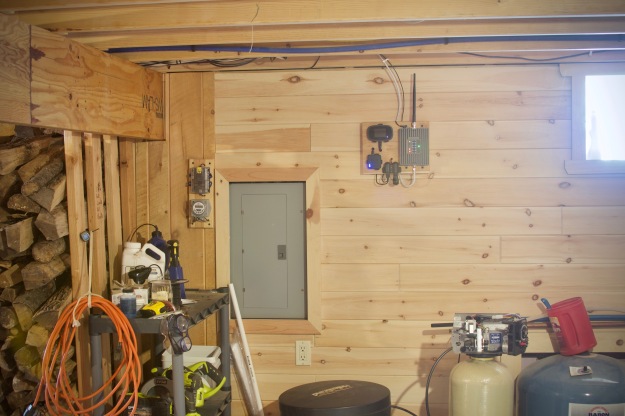 The yagi antenna was mounted up as high as was reasonable and aimed directly at the AT&T tower with the strongest signal. This also happened to be ideal for Verizon as well. The correct aim was very important. Trial and error revealed that the yagi is very fussy about being aimed directly at the tower. Aim wrong and the booster is essentially useless. Speed tests revealed that a reliable 5+ mb/s was achieved for both Verizon and AT&T. Not bad! In my testing 2mb/s was the minimum for the Blink cameras to work reliability. 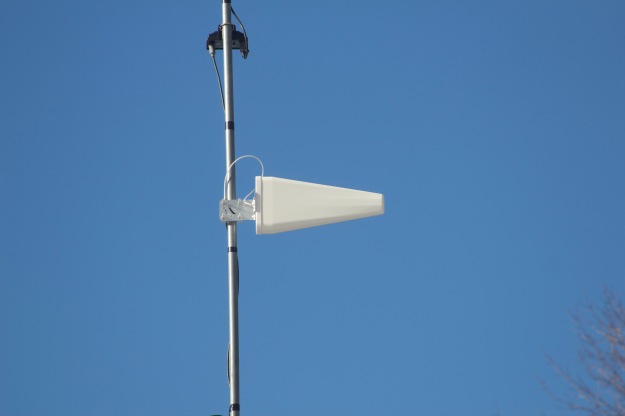 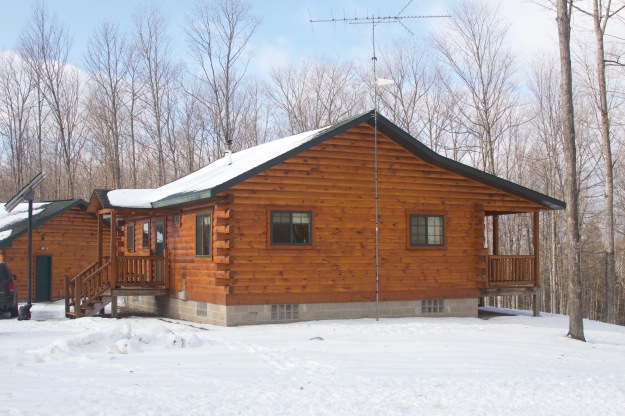 The rest of the installation was easy. Walk around and find a place for each of the five Blink XT cameras. Each camera mounted easily and the Ol’ man and I had fun playing with live mode and arming and disarming the system. 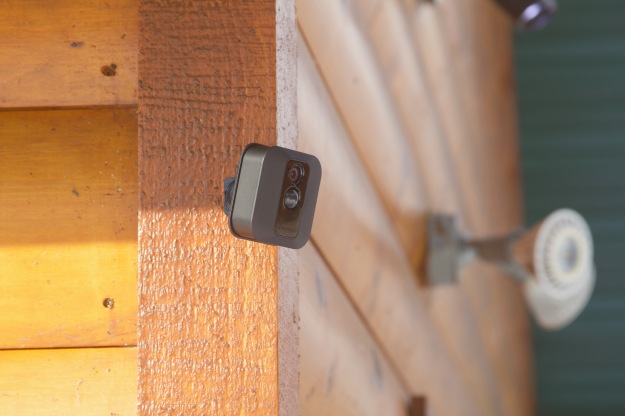 The Blink XT is perfect for the offgridcabin. Each camera is wireless and uses 2x AA energizer lithium batteries. With normal use each set of batteries should last 15 to 18 months (in my experience) before needing to be replaced. Rechargeable batteries are not recommended because the camera cannot accurately determine low-battery status on NiMH batteries (LiFeS2 has 1.8V open current voltage, and NiMH is about 1.25V). Also, LiFeS2 batteries like Energizer Ultimate Lithium AA’s have about 6.3 Wh while NiMH like envelop AA’s have about 2.5 Wh capacity. In other words, the lithium AA’s last 2.5x longer than a high quality NiHM AA. Whatever battery is used, the cameras have excellent endurance and are very easy to install and to relocate.

The Sync module is also very low power. I haven’t measured the total energy use of the booster, sync module, and MiFi hotspot…yet (I have a clamp meter). Prior to installation I used a 12V/2amp power supply to test the components and it worked without issue, implying that total power consumption is less than 24 watts.

Each camera has a built in thermometer and programmable temperature alerts. One camera is in the cabin and set to send alerts if the temperature drops too low. In the event of a failure in one of our propane heaters we can respond before the pipes freeze. The Ol’ man is also interested in the weather. How much snow did the cabin get? No need to wait until a neighbor can check and text back – check the cameras. Will the rain turn to ice? – check the temperature on one of the outdoor cameras. 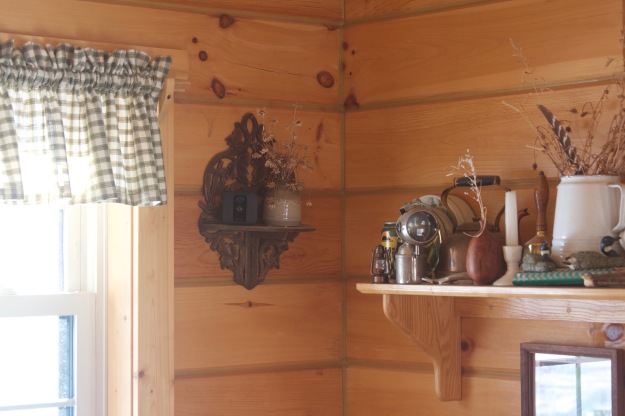 A 30 second clip on best quality is less than 2.5MB. With the tiny 1GB/month data plan Blink should be able to upload about 200 minutes of video each month, or about 600 clips 20 seconds long (20 clips per day).

Deer. Everywhere. Here are two videos captured after we departed the cabin yesterday. They don’t look too spectacular when viewed on a 5K computer display. However, pulling up a live feed on an iPhone at any time, any where is pretty cool – and it looks a lot better on a smaller screen.

The active zones have been updated on the porch camera. I’m hoping that this reduces the number of videos trigged by passing deer yet still records if anyone gets curious and decides to walk up on the porch and take a look. 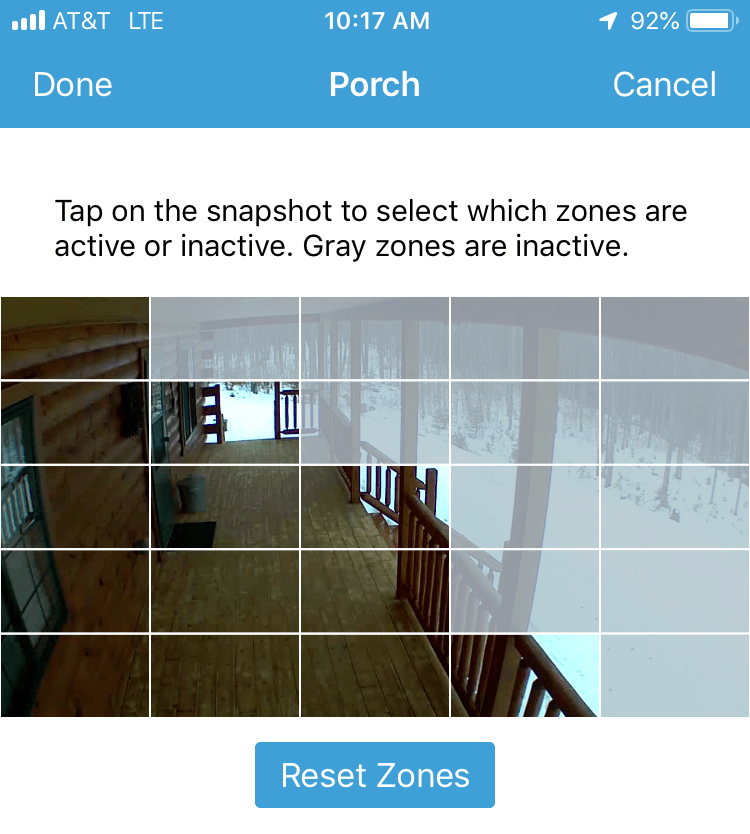 This is the home screen for the Blink App. If a camera is offline the thumbnail will be greyed out. Quickly opening the app and seeing that the thumbnails are normal and the little camera icon is connected with a green line to the cloud let us know everything is operating normally. 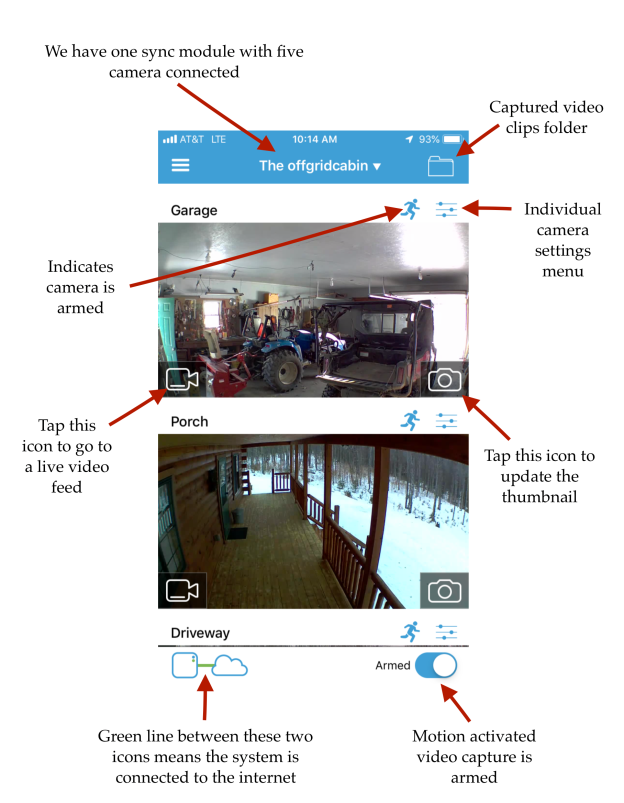 This post was not sponsored. I can say whatever I want 🙂

4 thoughts on “Cabin WiFi is here”